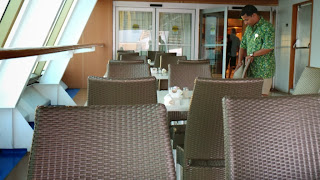 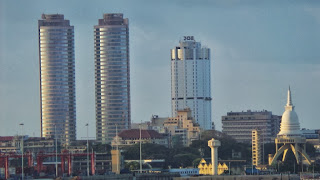 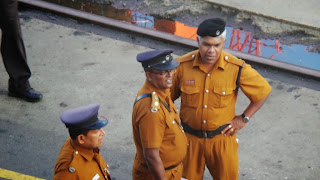 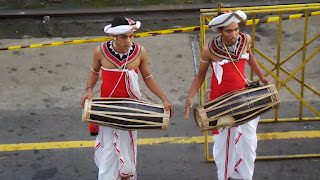 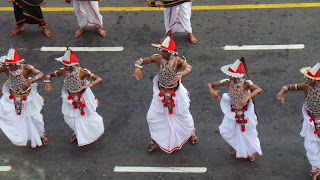 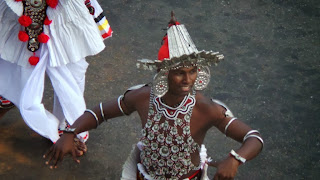 This was the Dawn Princess’s inaugural visit to Colombo.  They said it was much like India.... but we would have to say no!!

Nowhere as many people, so much cleaner and cared for.  There is a lot of work going on in the city and we have been told that they are getting ready for the Commonwealth Heads of Government meeting..  New hotels are going up and lots of paved footpaths are being laid, no idle standing around here, everyone seems to be working on something.

Though, I am getting ahead of myself.  This morning we woke up to new outdoor furniture outside of the Horizon Court.  They are now laminated table tops with brown polyurethane woven chairs. Very modern looking.  Just like any cruise someone has to complain.  “Don’t like the new furniture, looks cheap, looks too much like P & O”...

They have increased the number of tables here as well as replaced the plastic furniture by the Ice cream parlour and the smokers lounge on deck 12.

Back to the matter at hand, it was a lovely sail into Colombo, had this feeling of Kuala Lumpur light.

The port where we docked is a working port and as we arrived they were busy getting ready for us.  Tents were being erected and the markets were being set up.  The tour buses were all falling into formation ready to make their quick get away to Kandy, the elephant farm or the tea plantation.  The mimosas where being poured as Princess were getting ready for the return of those who left us in Mumbai to visit the Taj Mahal.

They must be still getting used to having cruise ships visiting as there was a bit of confusion and the most amount of officials we had ever seen  wandering around the port.  Even more than Mumbai if that is possible.

But to their credit they were one of the very few ports who had dancers down on the wharf to welcome us.

If you weren’t doing a princess tour they were running a shuttle from  the port to the Cinnamon Grand Hotel in town ( approx $16 return ).  Once we arrived at the hotel we arranged with one of the hotel taxis for a 4 hour city tour for $35 US.  Our driver was terrific , he was always smiling, always friendly and always a little hard to understand... but you know what it didn’t matter cause he really did do a great job.  He not only took us to the sites but he would get out of the car and walk with us and explain things the best he could. (On a side note there was a tent on the pier also offering taxi tours... we didn’t see this until we returned.)